Helmed by USAT Bestselling Author Caitlyn Lynch, 18 authors explore several lesser-known holidays. Featuring sweet country romance and sex in the big city, there’s something for all romance readers. Polar bear plunges. Sexy neighbors. Even a cute shifter or two. This anthology has it all!

Come celebrate the year with us!

I had the pleasure of reading this collection this week and was satisfied with both the quality of the stories as well as the variety. The anthology features both USA Today bestsellers as well as fresh, new writers and the result is a collection that will have something for everyone. The organizing theme – that of unconventional holidays – is a unique one and results in some interesting entries. For example, there is one of my favorite days, Pi Day, offered as the context for a lovely m/m romance, National Pride Day, the holiday for a Latinx F/F coupling, and an absolutely bonkers and delightful entry for Pins and Needles Day that features an M/M/F pairing that is as witty as it is sexy.

The anthology itself is very reader friendly, listing the Holiday, the day, a well-defined heat rating and, most importantly, extensive trigger warnings. It’s one of the most comprehensive I’ve seen in a collection of this type and, as a reader who may want to avoid certain topics, the listings are very considerate. I would highly recommend this anthology as an entry point for getting to know new writer as well as established ones in a way that is very accommodating to readers.

I was provided an ARC by the publisher.

When I first saw the marketing push for American Dreamer, I was ecstatic. M/M Romance? Check. Interracial romance where the other half is a sexy librarian? Check.

Wait, Afro-Latino from the Dominican Republic? Are you kidding me? This is what I LIVE FOR! Throw all the check boxes away.

The level of personal anticipation that I experienced for the March 4th release of Adriana Herrera’s debut novel was nothing short of ridiculous.  I haven’t waited for a book in this way since, well, forever.

Nesto is wonderful. An immigrant from the Dominican Republic, you understand his priorities right from page one. He’s moving to Ithaca from NYC to launch his food truck, OuNYe Afro-Caribbean Food, with the help of his family and life-long friends (all of whom get their own novel). He has one goal – to become successful within six months or go home.  He enjoys the support of his people and possesses the willingness to put in the sweat and blood to make success happen. But Nesto’s x-ray focus wavers when Jude, an adorable librarian, arrives at his food truck to buy his scrumptious food.

The attraction between the two men is palpable. Nesto and Jude’s respective culture and sexuality are presented as a fact of life, something the author reinforces by making sure that the novel is populated by diverse characters as a matter of course, including several of Jude’s gay friend, and Carmen, his Dominican co-worker and best friend. Jude speaks Spanish and has lived in Central American, which lifts the onus on Nesto being solely responsible for teaching Jude the ins and outs of his culture.

Every aspect of this novel is respectful of the full humanity of each character. There is no stereotyping, no othering of anyone. The landscape of the novel is a reflection of a diverse world. The challenges Nesto and Jude confront are rooted in aspects of the character’s personality and the way they feel about intimate relationships. Nesto and Jude’s journey takes center stage, and it is such a refreshing take for a novel featuring an interracial couple. 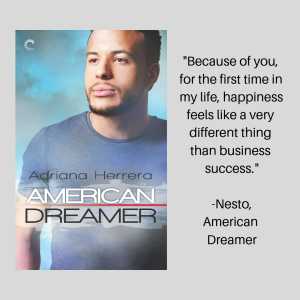 As a daughter of Puerto Rican parents who relocated to the US with the same dreams as Nesto and his mother, I can identify with Nesto’s ambition and his mother’s pride as well as the pitfalls of being a brown person in a white world. As one who was also brought up in a fundamentalist faith that grew increasingly inconsistent with the way I viewed the world, I can also identify with the pain Jude experienced of not feeling fully accepted by those whose job it was to love him unconditionally. Herrera captures so many dynamics in this novel, which serves as equal parts romance, equal parts commentary on what it means to function, find love, and eventually flourish in a world that is not always willing to accommodate your existence.

Oh, and the food descriptions are divine! That absolutely has to be said.

Given the feedback I've been getting lately on two of my manuscripts, I think it's time to revisit narration using my handy writer's reference guide. #themakingofastory #nortonsguidetocreativewriting #pointofview #narration #writingcraft
I didn't have the heart to post what those two scoundrels were up to before this moment but let's just say I can't stop laughing at the post-coital awkwardness between them 🤣🤣. * * * #hawks #gettinguptonogood #wasntasgoodasyouhoped
I don't usually like Dior ads but I find this one strangely compelling, probably because of Leonard Cohen's voice. I'm obsessed with Pattinson's dancing. #Repost @leavemealone_imreading . #robertpattinson #diorrob #diorhomme #faceofdior #leonardcohen #Iamyourman #mensfragrance #advertisement
I have a tiny hand. This little mousse confection fit perfectly in my palm. It tasted even better than it looked 😋🥮. Yep, I even ate it in the park. I ain't too good to eat my desserts in public 🤣🤣. #mousse #dessert #random
Throwback to San Bartolomeo in Maielleta ♥️♥️ #italia #italiansummer
#Repost @pinestereo • • • • • • It’s been a long and wild day don’t ask. BUT cool to get the mail and an honor to have my poem in @sewaneereview !
Follow Sera Taíno on WordPress.com